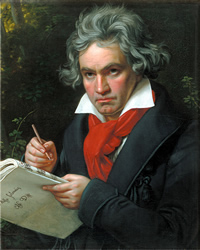 Ludwig van Beethoven baptized 17 December 1770[1] â€“ 26 March 1827) was a German composer and pianist. A crucial figure in the transition between the Classical and Romantic eras in Western art music, he remains one of the most famous and influential of all composers. His best known compositions include 9 symphonies, 5 concertos for piano, 32 piano sonatas, and 16 string quartets. He also composed other chamber music, choral works (including the celebrated Missa Solemnis), and songs.

Born in Bonn, then the capital of the Electorate of Cologne and part of the Holy Roman Empire, Beethoven displayed his musical talents at an early age and was taught by his father Johann van Beethoven and Christian Gottlob Neefe. During his first 22 years in Bonn, Beethoven intended to study with Wolfgang Amadeus Mozart and befriended Joseph Haydn. Beethoven moved to Vienna in 1792 and began studying with Haydn, quickly gaining a reputation as a virtuoso pianist. He lived in Vienna until his death. During the late 18th century, his hearing began to deteriorate significantly, yet he continued to compose, conduct, and perform after becoming completely deaf.

Beethoven was the grandson of Lodewijk van Beethoven (1712â€“73), a musician who came from Mechelen in present-day Belgium who moved at the age of twenty to Bonn. Lodewijk (Ludwig is the German cognate of Dutch Lodewijk) was employed as a bass singer at the court of the Elector of Cologne, eventually rising to become Kapellmeister (music director). Lodewijk had one son, Johann (1740â€“1792), who worked as a tenor in the same musical establishment, and gave lessons on piano and violin to supplement his income. Johann married Maria Magdalena Keverich in 1767; she was the daughter of Johann Heinrich Keverich, who had been the head chef at the court of the Archbishopric of Trier.

Beethoven was born of this marriage in Bonn. There is no authentic record of the date of his birth; however, the registry of his baptism, in a Roman Catholic service at the Parish of St. Regius on 17 December 1770, survives. As children of that era were traditionally baptised the day after birth in the Catholic Rhine country, and it is known that Beethoven’s family and his teacher Johann Albrechtsberger celebrated his birthday on 16 December, most scholars accept 16 December 1770 as Beethoven’s date of birth. Of the seven children born to Johann van Beethoven, only Ludwig, the second-born, and two younger brothers survived infancy. Caspar Anton Carl was born on 8 April 1774, and Nikolaus Johann, the youngest, was born on 2 October 1776.

Beethoven’s first music teacher was his father. Although tradition has it that Johann van Beethoven was a harsh instructor, and that the child Beethoven, “made to stand at the keyboard, was often in tears,” the Grove Dictionary of Music and Musicians claimed that no solid documentation supported this, and asserted that “speculation and myth-making have both been productive.” Beethoven had other local teachers: the court organist Gilles van den Eeden (d. 1782), Tobias Friedrich Pfeiffer (a family friend, who taught Beethoven the piano), and Franz Rovantini (a relative, who instructed him in playing the violin and viola). Beethoven’s musical talent was obvious at a young age. Johann, aware of Leopold Mozart’s successes in this area (with son Wolfgang and daughter Nannerl), attempted to exploit his son as a child prodigy, claiming that Beethoven was six (he was seven) on the posters for Beethoven’s first public performance in March 1778.

Some time after 1779, Beethoven began his studies with his most important teacher in Bonn, Christian Gottlob Neefe, who was appointed the Court’s Organist in that year. Neefe taught Beethoven composition, and by March 1783 had helped him write his first published composition: a set of keyboard variations (WoO 63). Beethoven soon began working with Neefe as assistant organist, at first unpaid (1781), and then as a paid employee (1784) of the court chapel conducted by the Kapellmeister Andrea Luchesi. His first three piano sonatas, named “KurfĂĽrst” (“Elector”) for their dedication to the Elector Maximilian Frederick (1708â€“1784), were published in 1783. Maximilian Frederick noticed Beethoven’s talent early, and subsidised and encouraged the young man’s musical studies.

Maximilian Frederick’s successor as the Elector of Bonn was Maximilian Franz, the youngest son of Empress Maria Theresa of Austria, and he brought notable changes to Bonn. Echoing changes made in Vienna by his brother Joseph, he introduced reforms based on Enlightenment philosophy, with increased support for education and the arts. The teenage Beethoven was almost certainly influenced by these changes. He may also have been influenced at this time by ideas prominent in freemasonry, as Neefe and others around Beethoven were members of the local chapter of the Order of the Illuminati.

In March 1787 Beethoven traveled to Vienna (possibly at another’s expense) for the first time, apparently in the hope of studying with Mozart. The details of their relationship are uncertain, including whether or not they actually met. After just two weeks Beethoven learned that his mother was severely ill, and returned home. His mother died shortly thereafter, and the father lapsed deeper into alcoholism. As a result, Beethoven became responsible for the care of his two younger brothers, and he spent the next five years in Bonn.

Beethoven was introduced to several people who became important in his life in these years. Franz Wegeler, a young medical student, introduced him to the von Breuning family (one of whose daughters Wegeler eventually married). Beethoven often visited the von Breuning household, where he taught piano to some of the children. Here he encountered German and classical literature. The von Breuning family environment was less stressful than his own, which was increasingly dominated by his father’s decline. Beethoven also came to the attention of Count Ferdinand von Waldstein, who became a lifelong friend and financial supporter.

In 1789 Beethoven obtained a legal order by which half of his father’s salary was paid directly to him for support of the family. He also contributed further to the family’s income by playing viola in the court orchestra. This familiarised Beethoven with a variety of operas, including three by Mozart that were performed at court in this period. He also befriended Anton Reicha, a flautist and violinist of about his own age who was a nephew of the court orchestra’s conductor, Josef Reicha.

Establishing his career in Vienna

Beethoven was probably first introduced to Joseph Haydn in late 1790, when the latter was traveling to London and stopped in Bonn around Christmas time. They met in Bonn on Haydn’s return trip from London to Vienna in July 1792, and it is likely that arrangements were made at that time for Beethoven to study with the old master. With the Elector’s help, Beethoven moved to Vienna in 1792. From 1790 to 1792, Beethoven composed a significant number of works (none were published at the time, and most are now listed as works without opus) that demonstrated his growing range and maturity. Musicologists identified a theme similar to those of his third symphony in a set of variations written in 1791. Beethoven left Bonn for Vienna in November 1792, amid rumors of war spilling out of France, and learned shortly after his arrival that his father had died. Count Waldstein in his farewell note to Beethoven wrote: “Through uninterrupted diligence you will receive Mozart’s spirit through Haydn’s hands.” Over the next few years, Beethoven responded to the widespread feeling that he was a successor to the recently deceased Mozart by studying that master’s work and writing works with a distinctly Mozartean flavor.

Beethoven did not immediately set out to establish himself as a composer, but rather devoted himself to study and performance. Working under Haydn’s direction, he sought to master counterpoint. He also studied violin under Ignaz Schuppanzigh. Early in this period, he also began receiving occasional instruction from Antonio Salieri, primarily in Italian vocal composition style; this relationship persisted until at least 1802, and possibly 1809. With Haydn’s departure for England in 1794, Beethoven was expected by the Elector to return home. He chose instead to remain in Vienna, continuing his instruction in counterpoint with Johann Albrechtsberger and other teachers. Although his stipend from the Elector expired, a number of Viennese noblemen had already recognised his ability and offered him financial support, among them Prince Joseph Franz Lobkowitz, Prince Karl Lichnowsky, and Baron Gottfried van Swieten.

By 1793, Beethoven established a reputation as an improviser in the salons of the nobility, often playing the preludes and fugues of J. S. Bach’s Well-Tempered Clavier.His friend Nikolaus Simrock had begun publishing his compositions; the first are believed to be a set of variations (WoO 66). By 1793, he had established a reputation in Vienna as a piano virtuoso, but he apparently withheld works from publication so that their publication in 1795 would have greater impact. Beethoven’s first public performance in Vienna was in March 1795, a concert in which he first performed one of his piano concertos. It is uncertain whether this was the First or Second. Documentary evidence is unclear, and both concertos were in a similar state of near-completion (neither was completed or published for several years). Shortly after this performance, he arranged for the publication of the first of his compositions to which he assigned an opus number, the three piano trios, Opus 1. These works were dedicated to his patron Prince Lichnowsky, and were a financial success; Beethoven’s profits were nearly sufficient to cover his living expenses for a year.